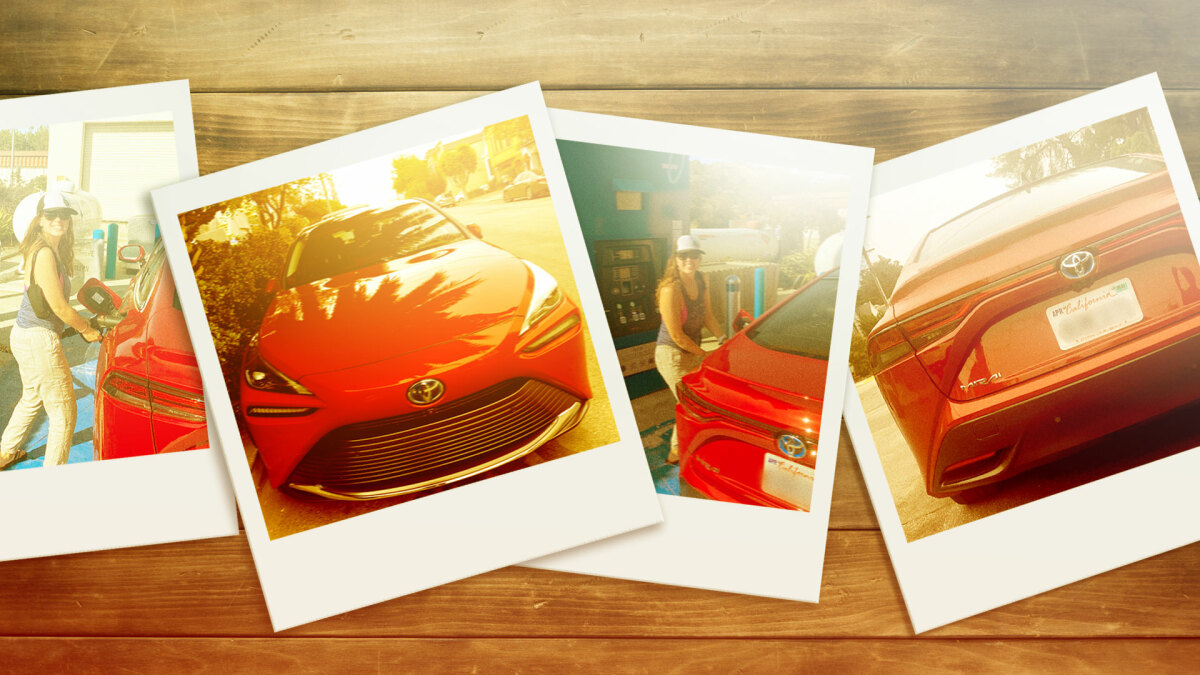 My hands were starting to go numb, something that tends not to happen when I’m refueling my car in July.

As I pulled helplessly on the frozen nozzle connected to my loaner 2021 Toyota Mirai, I looked around the San Francisco Shell station, desperate for someone to magically melt the hydrogen pump off the car so I could get out of there. I was testing out the car for its performance, aesthetics, tech, and anything else, but I could already tell I would only be thinking about refueling.

I frantically read and re-read all the signage, noting the warning to not pour water on the connector, and the reassurance that a frozen nozzle wasn’t unusual. Eventually it started to warm up, probably from all my stressed out energy, and the nozzle slipped off after a final tug.

At $16.50 per kilogram — meaning over $80 to fill up the Mirai’s 5 kg tank — the high price of hydrogen had already made me wary. But it was the freezing equipment that really showed me why electric vehicles are becoming more accepted while hydrogen-fuel cars like Toyota’s Mirai are still niche and special. The Mirai hasn’t brought hydrogen into the mainstream like Tesla did with battery electric.

When it comes to alternative fuel vehicles, electric charging isn’t a breeze, but at least it doesn’t require winter gloves.

Pulling up to the hydrogen station.
Credit: Toyota

It’s really saying something that hydrogen, an odorless, invisible compressed gas (hence the freezing pump equipment) that fills up the tank quickly, doesn’t have an edge over slower electric charging. I was in and out of a hydrogen station within 10 minutes, just like at a gasoline stop. And meanwhile, I’ve sat plugged into charging stations for over two hours and still left with a partially charged battery. But electrons as fuel still appear to be in the lead when it comes to gaining widespread acceptance.

For one thing, despite the slow refueling, there are more places to charge when out and about with an EV — more than 26,000 public stations nationwide and about a third of those in California alone. As hydrogen has fallen by the wayside as a viable alternative fuel, battery electric charging infrastructure has expanded. There were 47 hydrogen refill stations in California as of earlier this year. Toyota has plans for at least 20 more into 2022. Outside of California, there aren’t enough stations for most people to feel comfortable driving a hydrogen-dependent vehicle.

Pop open the hood of the Mirai and you’ll see the fuel cell stack. It takes hydrogen from the tanks and mixes with oxygen from the outside air, which creates an electric current that’s then separated into an electric motor and battery in the back of the car. This is why fuel cell cars are sometimes referred to as “plug-less” electric vehicles. And that hydrogen has to live somewhere in the car, meaning they are also frunk-less.

No matter how electric and fuel cell electric vehicles (FCEVs) stack up, “EVs stepped up and took all the momentum,” Daniel Davenport, senior director of automotive for tech consulting firm Capgemini Americas, said in a recent phone call. “In terms of a popularity contest [with hydrogen], electric is winning,” Davenport added.

Even in more hydrogen-friendly California, a recent trip in a Mirai from San Francisco up the coast required a pre-meditated driving plan and a separate app, Alt Fuel, to find available hydrogen stations. The last hydrogen station for hundreds of miles was in southern Marin County, on the other side of the Golden Gate Bridge. Talk about range anxiety.

With electric, when there isn’t a public electric charging station in sight, you can almost always find a wall outlet and slowly recharge. With the Mirai and its ilk, you can’t plug in at home (or wherever you find a plug). Even though the Mirai has a small electric battery, the hydrogen needed to produce the electrons and protons (with water as a by-product) to power the battery is only available at a few public stations. There is no home plug-in option for the Mirai. In all of San Francisco, there were only two stations where I could buy hydrogen.

Hydrogen is part of the bigger effort to reduce oil dependency in transportation, as Robbie Diamond, CEO of SAFE, an energy security nonprofit, wrote in an email. But, he continued, “With much of the fuel delivery infrastructure already in place thanks to the electric grid, EVs are currently closer to realizing the economic, environmental, and national security benefits that come with reduced oil consumption.”

Making hydrogen fuel isn’t always as “clean” of a process as powering electric grids with renewable energy from wind or solar. As a recent study claims, the process of extracting hydrogen from natural gas releases much more greenhouse gas pollution than previously thought. Consultant Davenport pointed out the existence of hydrogen fuel production methods that are more “green,” but it may be too little, too late.

Between Electrify America and other charging network partnerships for free charges, EV tax credits, other federal and state EV infrastructure efforts, and mass production of EVs driving down manufacturing and battery costs, electric vehicles are more and more tempting.

Boosting hydrogen use is still a White House priority. It’s a standout part of the bipartisan infrastructure bill with $8 billion set aside for at least four hydrogen production hubs. And yet the Mirai, which is one of only a few fuel cell electric vehicles (FCEVs) that are powered by hydrogen, can only be driven in a few U.S. states. Hawaii, for instance, only has one station in Honolulu.

Toyota’s hydrogen car qualifies as a zero-emission vehicle, but hydrogen isn’t getting the attention, support, or even publicity that EVs receive. It doesn’t help that Tesla CEO Elon Musk called hydrogen “stupid” — or that filling up means you might literally freeze the car to the hydrogen dispenser.

The car drove quietly and smoothly, much like other EVs. Unless I really studied the center screen showing how the energy was flowing through the car, I forgot there was a tank filled with highly pressurized hydrogen gas stored under the hood. It was only until the range started to drop that I’d start to stress about my next hydrogen fill-up.

Toyota is offering a huge incentive package worth $15,000 for three years of free hydrogen fuel to woo Mirai buyers, especially until hydrogen prices drop (if they ever do). The car starts at $49,500 for up to 400 miles of range on certain models. Toyota has been lobbying hard for hydrogen as the hybrid Prius pioneer falls behind the electric space, as the New York Times reported.

But my overall takeaway from my time as an FCEV driver? EVs’ head start will freeze out cars like the Mirai — and not just at the hydrogen pump.