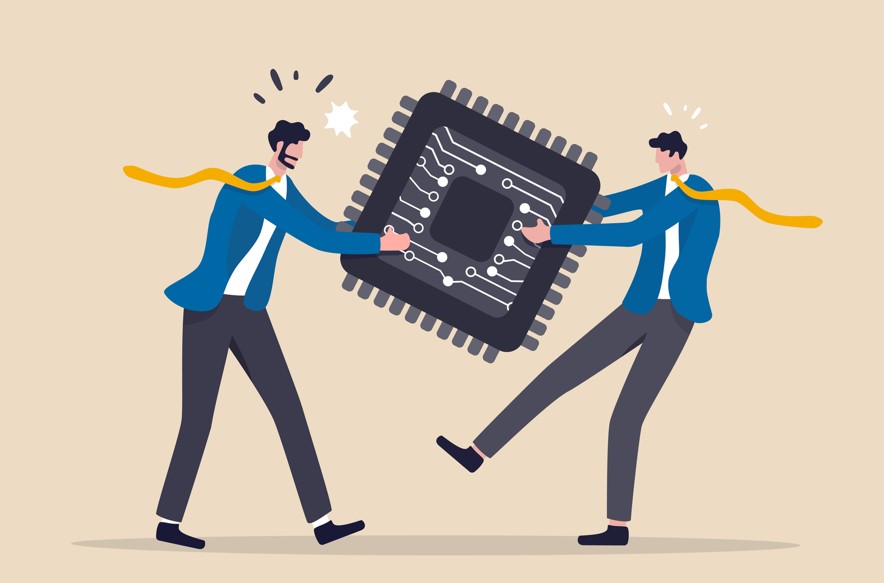 The story has become somewhat familiar by now: semiconductors and other electronic components have been in short supply for months, with effects felt particularly in the automotive industry. This has meant long waits for new models, soaring prices for used cars, and in some cases temporary plant shutdowns as car production is halted.

Don’t hold your breath that this situation is going to end soon, as many industry observers don’t expect any relief until at least next year.

A perfect storm of circumstances, precipitated largely by the ongoing COVID-19 pandemic, has created a supply and demand crisis for semiconductors and other electronics components in the automotive industry that shows no signs of ending soon. The situation has also affected consumer electronics devices such as flat-panel TVs and mobile phones and now threatens sectors such as security and infrastructure, which could manifest itself in shortages of parts such as smart cards.

In addition, demand for materials used in many components in shortage has created shortages for many key metals, exacerbating shortage issues, with near-term relief unlikely.

Wait until next year

“Most indications are that it will take six to 12 months to bring things back into balance,” says Jack Gold, president of Jack Gold Associates, and industry consulting firm.  Gold noted that production capacity adjustments by electronics companies are only now starting to be felt. “While all the companies are trying to increase output to meet demand, there is only so much fab space available. “

Nowhere is the semiconductor shortage felt more than in the automotive industry where the expanding role of electronics has been unprecedented. The growth of hybrid-electric and fully electric vehicles is obvious, but even conventional vehicles powered by traditional internal combustion engines use far more electronics parts than before. Electronics are used in engine control modules, suspension and braking systems, and largely control the infotainment systems that enable drivers to easily communicate with others and provide many of the same entertainment options available in home electronics.

Michael Yang, senior director of semiconductor research for market research firm Omdia, says that capacity allocation issues were a major factor in the current automotive industry crisis. “Automotive manufacturers adjusted their forecasts downward the first quarter of 2020. It wasn’t until the fourth quarter of last year that demand really started to increase for automotive. At the time, demand for consumer electronics was still strong.” Available production capacity was allocated toward consumer products.

Jack Gold of Jack Gold Associates added,” To some extent, we hit a perfect storm with this one― COVID made some segments increase demand significantly (e.g., PCs, smart phones, and even home entertainment) as users needed to upgrade quickly and/or acquire new equipment for their new workplaces. That put some pressure on the system. Add to that the need for remote work and some fabs were understaffed. That said, I think most vendors did a stellar job of keeping their lines up and running efficiently despite these challenges.”

But given the time it takes to switch over production lines for another product, it has not taken long for the damage to be felt by the automotive industry. Omdia’s Yang notes that electronics companies are now readjusting their manufacturing capacity allocation from consumer electronics to automotive, as demand is leveling off for PCs and displays. While he expects supply and demand to in better balance, that will not likely happen for another 12 months.

Component shortages have led to price increases, further straining the ability of OEMs to meet design requirements.  Supplyframe, a firm that tracks industry supply chain trends, cites in the latest version of its Components Intelligence Quarterly Report, Supplyframe a number of troubling trends that led to the firm to project global semiconductor shortages lasting until 2023. The trouble signs include an increase in component prices of up to 40% as compared to last quarter and a lengthening of microchip analog device lead times as buffer inventory has now been committed, with average lead-times now 25 weeks to over a year.

Exacerbating the supply issue is the fact that leading-edge tech product designs demand chips built with processes and technologies that are already in short supply. “What makes it more of a problem is that many of the high tech items in demand want chips made on the latest process nodes (e.g., 7 nm) where there is already a bottleneck,” says Gold Associates’ Gold. “Other chips, like IoT and networking are on older nodes that have more capacity in the fabs, so they are less affected. So it’s a very mixed bag on availability. But it’s also a problem with scheduling, as many companies increased orders quickly, but most fabs can’t just turn the crank and increase output dramatically. The chip supply chain is long and complex, so long-term scheduling is required.”

Mounting concerns over future part availability could very well lead to another long-time industry practice: hoarding inventory to ensure ample part supplies for future design. TrendForce, an industry market research firm, said in a June report that memory suppliers are currently carrying a relatively low inventory because of aggressive stock-up activities of clients across different application segments. The firm noted that inventories of DRAM suppliers and NAND Flash suppliers were averaging 3-4 weeks and 4-5 weeks, respectively, with suppliers likely to step up procurement.

TrendForce expects overall procurement of server memory products to intensify during the current quarter, with DRAM prices rising 3-8% sequentially. Also, due to the growing demand for enterprise SSDs and NAND Flash wafers, the firm also projects a 5 to 10% quarterly increase in NAND Flash prices, compared to a previous price increase projection of 3-8%.

Omdia’s Yang notes that power semiconductors have been a trouble spot. “Power semiconductors are used in many leading-edge applications, such as 5G infrastructure and electric and hybrid vehicles.  And we’re quickly ramping up the number of 5G mobile phones.” The following graph shows the shortages of Power Management Integrated Circuits (PMICs) since the COVID-19 pandemic hit.

Underlying the shortages of semiconductors and other components have been material shortages. William Crockett, vice president of TANAKA Precious Metals, says aluminum, palladium, cobalt, copper, lithium, magnesium and tungsten are “some of the metals in a ‘risk of supply’ shortage now. Many are used in the automobile and semiconductor industry.” The following table shows key materials and production locations.

Crockett noted that as China is a major supplier of key materials, the ongoing trade war has created economic and political challenges that will need to be surmounted in order to achieve supply chain and material capacity. But he added that may be years off.

“Automakers had been hoping for normalization of supplies starting this summer, but a poll of 100 industry professionals by GlobalData found that 47% think the shortages will stretch to the end of the year while 32% expect them to continue into 2022. The shortages will likely continue throughout this year. Some reports of material and component capacity constraints, I hear, will continue into 2024,” Crockett said.

Raw material shortages manifest themselves in production delays. SuppyFrame also noted that semiconductor production and testing have been hampered by a wafer shortage and COVID-19 outbreak in Taiwan, where about 50% of semiconductors are manufactured. The firm added that the top four semiconductor manufacturers serving the automotive industry continue to struggle with shortage issues, with an increasing number of parts out of stock.

While semiconductors have borne the brunt of the shortages, other electronic parts have seen shortages also. For instance, components for liquid crystal displays, such as glass and driver ICs, have remained in tight supply, according to Ross Young, president of Display Supply Chain, a market research firm covering the display industry.

Much of these shortages arose as the pandemic triggered a surge in demand for LCD TV panels as people stayed home and spent on TVs and computer displays. “The demand surge from the pandemic, coming after an initial panic when orders were cut, led to an unprecedented price increase for LCD TV panels,” said Young. “The shortage was exacerbated by the general component shortage of semiconductors which constrained the supply of display driver ICs, and by some supply disruptions for display glass.”

As with semiconductors, the process of increasing production capacity to meet a surge in demand has also played a factor. “Capacity takes time to bring online, and the display industry was in distress through the summer of 2020.” Young added. “New fab capacity typically takes two years from initial planning to the start of mass production, and the earliest plans for new capacity were announced in December 2020. “

Whether it be displays, mobile phones, or automobiles, OEMs more than ever have to walk a fine line between trying to react to ongoing, volatile supply and demand cycles while keeping their long-term business and technology goals in sight. Amidst an ongoing pandemic that so far shows no sign of ending and the likelihood of unforeseen economic and political events, the next few years will be challenging to say the least.

Spencer Chin is a freelance technical writer and editor based in the New York City metropolitan area.