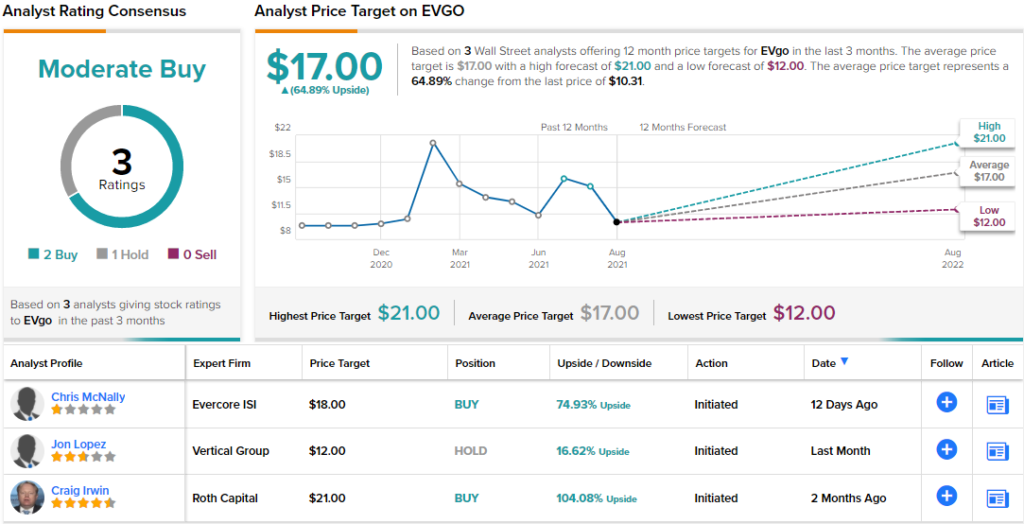 Electric vehicles (EVs) have been on the roads for the better part of two decades now, in slowly increasing numbers. The technology isn’t new – EVs were part of the initial wave of automotive technology over a century ago – but modern metallurgy, batteries, and drive trains have made them more practical. While the internal combustion engine still offers an overall better package of performance, power, and price, EVs are catching up.

They are getting a boost from the government, in the form of supportive policies. The Biden Administration is seeking a pledge from US automakers to make a full-court press in promoting electric cars, with a goal of reaching 40% EV sales by 2030.

In a recent report on the EV sector, Evercore analyst James West outlines the Administration plans, and its connection to the auto companies. West says, “We expect massive Federal incentives to be announced over the coming weeks for the EV space. Building the infrastructure required for wide-scale EV adoption will require cooperation between the federal government and corporations.”

If West is right, then EVs will offer investor a wide range of opportunity in the coming months and years. Indications are, that this will happen. The infrastructure bill pushed by the Administration is working its way in the Senate, and includes $7.5 billion in funding for EV charging networks, a vital precondition for expanding vehicle sales.

Wall Street analysts have taken notice, and are tagging the stocks that offer high return potential now, for investors willing to take on some risk (inherent in a new technology and/or manufacturing track) and get in on the ground floor.

We’ve looked up some of those recent analyst picks using the TipRanks database, to find out what makes them compelling choices for investors today. These are Buy-rated stocks, with considerable upside potentials. Let’s take a closer look.

We’ll start with EVgo, a newly public company in the charging station segment of the EV sector. EVgo operates one of the largest EV charging networks in the US, with more than 800 locations across 65 metro areas in 34 states. The company boasts that over 130 million people – an impressive 39% of the US population, lives within 10 miles of an EVgo charging unit. That density is even higher in California, the country’s largest auto market, and the one moving fastest to an all-electric fleet.

EVgo went public just this past July, through a SPAC merger with Climate Change Crisis Real Impact I Acquisition Corporation (CLII). The merger was completed on July 1, and EVGO shares started trading on the NASDAQ on July 2. CLII brought $230 million in fresh capital to the merged entity, which also received $400 million in private investment in public equity.

The company is using that money to expand its network. At the end of July, EVgo announced the installation of 8 new charging stations in Santa Monica, California. The new stations will support the city’s commitment to an all-electric vehicle infrastructure. The city now owns 150 EVgo charging ports. Six of the new ports are ‘fast’ chargers, capable of delivering a 180 mile charge in 15 minutes. EVgo has over 140 fast chargers in the greater LA area.

The analyst added, “EVgo has a differentiated business model targeting key OEM relationships to capture customers at the time of EV purchase and a dedicated fleet charging station model as fleets and rideshare have higher utilization rates. The electrification of mobility is also as ESG related theme. EVgo’s owned assets allow it to provide electricity as a service and should be valued more like a ‘SaaS’ tech company in the future and less like an ‘industrial equipment provider.'”

Overall, there have been 3 recent reviews of EVGO shares since the SPAC combination was completed, and they break down 2 to 1 in favor of Buy over Hold, for a Moderate Buy consensus rating. The stock is selling for $10.27 and its $17 average price target implies ~65% one-year upside. (See EVGO stock analysis on TipRanks)

Let’s stick with charging stations for the moment. ChargePoint Holdings, like EVgo, is a major charging network operator in the US, and also has major operations in Europe. ChargePoint’s networks include over 112,000 discreet charging locations, and boasts over 5,000 commercial and fleet customers.

ChargePoint has been in the EV charging business for over 13 years, and went public through a SPAC merger in February of this year. The merger, with Switchback Energy Acquisition, was approved on February 25 and the CHPT ticker started trading on March 1.

ChargePoint will report its fiscal Q2 results in the upcoming weeks, but a look back at the Q1 earnings may be useful. The company saw a record number of new customers and a 24% yoy growth in revenue, to $40.5 million. Of that total, $26.8 million came from networked charging, up 36% yoy. The EPS net loss, at 84 cents per share, was deep, but a significant improvement from the $2.46 loss reported in the previous year’s Q1.

Among the bulls is D.A. Davidson analyst Matt Summerville who takes a bullish stance on CHPT shares.

“We believe CHPT is among the best-positioned to capitalize on strong demand for EV charging infrastructure, with a portfolio of easy-to-use solutions and attractive recurring revenue opportunities… We envision revenue growth accelerating in FY23 and FY24 as EV adoption continues to rise and CHPT capitalizes upon the significant spend associated with the much needed build-out in EV charging infrastructure to support this trend, as well as a ramp in recurring revenue driven by associated network/service subscriptions,” Summerville opined.

Summerville’s Buy rating on the shares comes with a $30 price target implying an upside of ~20% for the year ahead. (To watch Summerville’s track record, click here)

The Strong Buy consensus rating on CHPT shows that Summerville is far from an outlier. There are 8 recent reviews here, and those include 7 Buys against just 1 Hold. The stock has an average target of $35.75, suggesting ~43% upside in the next 12 months, from the current trading price of $25.08. (See CHPT stock analysis on TipRanks)

From charging stations in North America, we’ll shift our focus now and look at EVs in China. China has one of the world’s largest and fastest growing electric vehicle markets, pushed actively by a government looking to promote low- or no-emission vehicles to alleviate air pollution in the country’s megacities. XPeng is an EV maker in the mid-range price bracket, marketing to China’s middle class.

XPeng has two EV models in production, the P7 sedan and the G3 SUV. Both are all electric, and feature a combination of moderate pricing, modern styling, and long range to attract younger customers. The P7 sedan has a range of 700 kilometers on one charge; the G3 has a range of 520 kilometers and a short 30 minute charging time.

This performance has been matched by rising revenues, which hit $455 million in the first quarter of the year. This was the second quarter in a row of sequential gains. The company held its IPO just last summer, so there are only three public quarterly reports so far – but they show steadily rising revenue as the company’s production model cars grow gain recognition and popularity.

The analyst continued, “We highlight that Zhaoqing municipal government started to provide Rmb10,000 per unit cash subsidy for those vehicles made in Zhaoqing (such as XPeng P7 and G3i), and sold in Guangdong province from July 2021, which should boost XPeng 2H21 volumes.”

XPeng has the distinction of a unanimous Strong Buy consensus rating from the Wall Street analysts, with 7 positive reviews on file. The shares are selling for $42.23 in New York, and the average price target of $55 implies a ~30% upside from that level. (See XPEV stock analysis on TipRanks)

Disclaimer: The opinions expressed in this article are solely those of the featured analysts. The content is intended to be used for informational purposes only. It is very important to do your own analysis before making any investment.